First day proper, and what a day. There is so much to go through!
So the day started at at 1am, the internet here his rubbish so I wasn't able to watch the Pats smash the Steelers, but the net was good enough for me to be able to live stream a southern Alabama radio station, so I got to listen to it. I also decided that Alabama probably isn't for me.

We got to the warehouse at around 9am, and the first job was chopping veg and loading the van with supplies. I wasn't expecting to be in camp today, so I was surprised to get seconded to the Free Shop team, and sent out to Dunkirk.

The free shop is basically a rationing station, like in the world wars. We have a container unit stocked to the gills with essentials, bread, oil, tins, and some fresh apples (not enough though). The refugees would come up and present us with a little card that stated what hut they lived in, and how many were in the family, they would then tell us what they wanted and we would pick it for them. The women and children were allowed into the container, the men had to queue and we would pick for them. I have never seen so much excitement for some mealy apples, and stale bread, but it's all we have to give. We have a couple of special items each day to mix things up, today was some posh popcorn, they loved it, but it ran out really fast, and the look on their faces when we said we had no more was heartbreaking. The free shop was attached to a community kitchen, by community kitchen I mean a tent with some wood burners in. Whilst the families get basically a crappy beach hut, many of the men just live in the kitchen, so it their bedroom too.

Dunkirk is a mainly kurdish camp, so these are guys fleeing ISIS. They are really cheeky, very friendly, but hard and tough as nails. Many were from Afghanistan, but also Iran and Iraq. They were from all walks of life, I spoke to students, IT bods, bakers, but being in the camp is a leveller, they are all just people eeking out an existence. I had my heart broken at least once an hour, luckily though they are so friendly you only stayed down for a minute. There is a dark undertone though, crime is very real, the camps are run by basically the mafia, and they cause problems for other refugees and aid workers alike. An aid worker who worked with women over there has had to leave camp after death threats just today, and those threats are real, not just bluster.
The shop was mental when it opened, lines out the door, and people just thrusting their cards at you. My kurdish is non existent, but by the end of the shift I knew a few words. I will be updating you on what I've learnt, and should you want to learn too I will be doing a word a day, it will spelt wrong, but as it sounds.
At about 2.30 it started to calm down a bit, we had a few chancers come back and try and get more apples, but we'd long since given them away.

Conditions are for want of other words, fucking terrible, even though this is seen as one of the better camps. It's freezing, there are services, but they are stretched, and mud/litter make up the ground. Imagine a festival at 6am in the cold hard light of day with people huddling round burning trash to keep warm. There is a police presence, but by all accounts they are as much part of the problem than they are part of the solution. I'd like to speak more about the situation, and I will, but there is just too much to cover in just one post.

The warehouse however is great. Full of lots of happy smiley people, from all walks of life, youngest would be 18, right up to a guy in his 70's. I'm going to be working more as part of the cooks crew over the next few days so will be able to tell you more about the production side of food.

The lady who's guest house I'm staying is is amazing! Sylvie is very involved in the camp and knows many people there. Around lunchtime today she came and asked it I would mind moving rooms as she is taking in a refugee who she has been working with, to the house for a week to give him a break. So there are currently 2 other volunteers, both girls, one American and one Portuguese, Sylvie and her daughter Celeste, and this 22 year old refugee from Iraq, Rebar (pronounced Ree-Bear). This kiddie is amazing! He has known nothing but war and persecution his entire life. ISIS, Sadam, and western intervention has destroyed his homeland, killed his friends and forced him to flee for his life, and he is still happy, smiley and so incredibly friendly. He was a baker back home and has promised to show me how to make naan bread, he likes Snoop, 2Pac and Celine Dion, yep, that's right, Celine Dion, he loves her voice and listens to her in French to help his language skills. He has kindly agreed to let me write down his story, and in the next day or two we are going to sit down and get it all on paper. It's heartbreaking, but I want to make sure I have a record of it to remind me that no matter how shit my life gets, this kiddie has had it a 1000 times worse, and is still smiling!

I'm going to sign off now as it's been a long and emotional day. There is so much I haven't been able to fit in, but over the coming days, weeks and months I hope to get as much of it down as possible, for posterity.

'We have no more apples today, but maybe we have some tomorrow, insha alla' 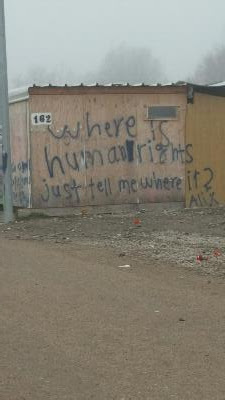 Alix, sums it up pretty well!
Posted by Thom Rewcastle at 13:09

Thom Rewcastle
Hi, I'm Thom and for the next few months of my life I'm going to be based in Calais cooking for worsening refugee crisis as a volunteer. This is my blog about life in the camp. Should you wish to donate and enable me to stay longer, please please do, you can from this link which will stay open for the duration of my stay: https://www.gofundme.com/cooking-for-refugees